L.D. Burchalkin was born on January 9, 1939 in Leningrad. At the age of 13 he was admitted to the children’s team under the Sports club «Bolshevik» which was not among the grand prise winners in Leningrad championship, but earned the fame of a «prickly» and uncompromising team; its players were also unyielding and competitive. This way the big football began for Lev Burchalkin. The future forwarder debuted as a central back in «Bolshevik» as he was the tallest in the team. In early 1957, «Zenit» was looking for most promising trainees of the city football at the preseason get-together; a red-haired centre back by the name of Burchalkin was among them. The history of world football knows a number of cases when the players retrain from forwarders into backs, however successful inverse shifts can be counted on the hand. Even Burchalkin does not know who had the idea to redirect him to the line of attack, but by September 1957, when the young forwarder had his debut in the first team, he had already managed to demonstrate exceptional bombardier’s qualities, scoring almost in every match.

The seventeen-year-old Lev Burchalkin debuted in the line of attack of «Zenit» on September 15, 1957. In «Zenit», Burchalkin stood out from the start not only by his red hair, but also due to his gift of scoring the decider. Petersburg fans even called him «Burchalkin-Vyruchalkin». Actually, he was called «Vyruchalkin» (come-to-help) mainly by the journalists. The spectators in the grandstands called him just «Leva»!

In 1962 and 1963 the dark/light blue-white players often collected a capacity crowd at the 100-thousand-seat stadium; one of the leaders of the team was Master of Sports (from 1961) Lev Burchalkin. The forwarder, constantly aiming to attack, never sparing his forces, was incredibly popular in Leningrad.

In May and June 1964, he played two matches for the USSR Olympic team. In the decisive games against the select team of GDR, Burchalkin replaced the injured captain of the team, Valery Lobanovsky from Kiev, at the left wing of the attack. A bit earlier, on May 20, 1964 in Moscow, Lev Burchalkin had a debut in USSR national team in a combat with the Uruguayans (1:0). That match for the USSR collected team was the Leningrad forwarder’s sole match of that kind.

Within 16 seasons of Lev Burchalkin’s playing for «Zenit», not a single generation of his partners changed.

It seemed, the destiny had prepared for Lev the role of coach of his home team in the future. However, this did not happen: the first team in his coaching career was «Luch» in Vladivostok – Lev Burchalkin trained it from 1973 to 1976.

In 1977, he was appointed administrator of «Dinamo» (Leningrad), and Lev Dmitrievich was cut off from the coaching work. After studying at High Coaching School, Burchalkin worked as a state coach of collected teams in Leningrad.

In 1982, he was invited again to work with «Luch» as a coach, and Burchalkin spent another 4 seasons in Vladivostok. And further he had probably the most exotic period in his coaching career – for two years he was a coach of one of the Maldives clubs! 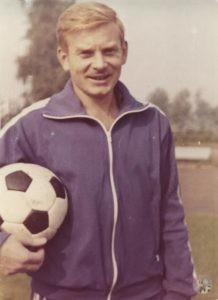 In 1992, a new invitation to Vladivostok came. The return was sensational: in 1992, «Luch» supervised by him won convincingly a zonal tournament in the first Russian league and won a ticket to the premier league for the first time in its history.

In 1993, Lev Dmitrievich was appointed coach of Petersburg «Locomotiv» and let it win a ticket to the second league in a tough fight.

In 1995, a new invitation to Vladivostok followed, and Burchalkin again became the chief coach of «Luch» that played in the first league of the championship of Russia. In that season, the Vladivostok team showed its best result, playing in the first league, and Burchalkin was invited to the coaching staff of «Zenit» that returned to the premier league.

From 1996, Lev Dmitrievich’s coaching work was inextricably linked with the home club. In 1996-1997, he was one of the coaches of «Zenit» with Pavel Sadyrin. From 1998, he headed «Zenit-2». The season of 2002 in fact was failed; the team played weakly, although the coach worked at full capacity, with little or no rest, as earlier in the «Zenit» attack line. Lev DmitrievichBurchalkin achieved people’s true love in his native city where he was literally doted. He has been a cult figure of St. Petersburg football, and many of his achievements (16 seasons in «Zenit» (1957 to 1972) where he was captain of the team for 8 years; the recognised «Zenit»’s leading scorer 5 times; 400 games played and 78 goals scored in championships) forever entered the history of the Russian football. This person not so long ago was worshipped by the fans who yelled «Burchalkin!» in unison at the crowded grandstands of the one-hundred-thousand-seats S.M. Kirov stadium.

The legendary Leningrad footballer, the honoured coach of Russia, Companion of II-category Order «For Merit to the Fatherland», L.D. Burchalkin died after an extended illness on September 7, 2004 in St. Petersburg. In September 2006, the Football Club «Zenit» inaugurated a monument to the outstanding forwarder on his grave at the Seraphim Cemetery.